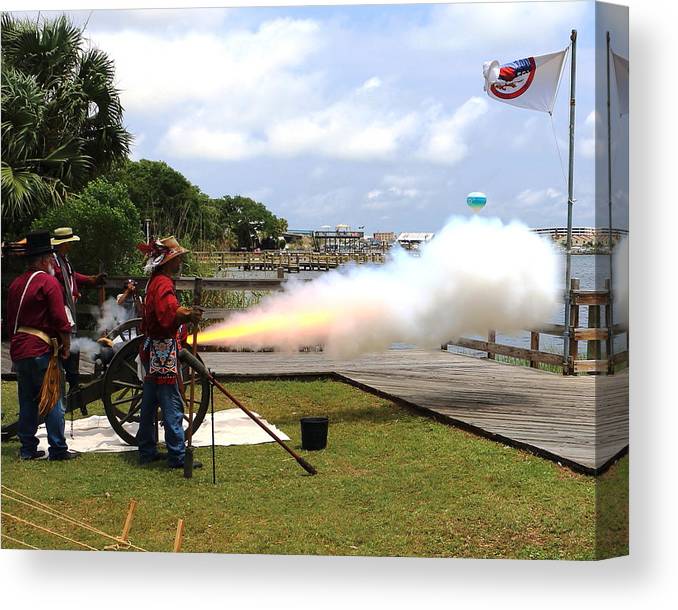 Reed's Raiders Respond canvas print by Larry Beat.   Bring your artwork to life with the texture and depth of a stretched canvas print. Your image gets printed onto one of our premium canvases and then stretched on a wooden frame of 1.5" x 1.5" stretcher bars (gallery wrap) or 5/8" x 5/8" stretcher bars (museum wrap). Your canvas print will be delivered to you "ready to hang" with pre-attached hanging wire, mounting hooks, and nails.

This famous festival has been held every year in Fort Walton Beach, Florida since the early 1950s. It honors the local pirate legend with a parade,... more

This famous festival has been held every year in Fort Walton Beach, Florida since the early 1950s. It honors the local pirate legend with a parade, fireworks, and associated celebrations. The festival has a Mardi Gras flair rather than a historical focus, with locals, young and old, dressing up in full pirate gear, "Arrrrr!" http://en.wikipedia.org/wiki/Billy_Bowlegs_Pirate_Festival

Larry Beat hails from Toledo, Ohio but has called the Emerald Coast Florida his home for 30 years. A 20-year Air Force veteran, he worked for the City of Destin for 13 years in Planning and served as the City's photographer. His photos have been published in The Destin Log and the NW Florida Daily News. He also photographs for the Greater Fort Walton Beach Chamber of Commerce. His photos have been featured in the annual Mattie Kelly Environmental Institute's calendar. Larry has been an artist for over 60 years, starting his artistic ambitions as an 10-year old attending Saturday morning art classes at the Toledo Museum of Art during a 4-year span. Later, at the University of Toledo, he continued art studies as well as French...